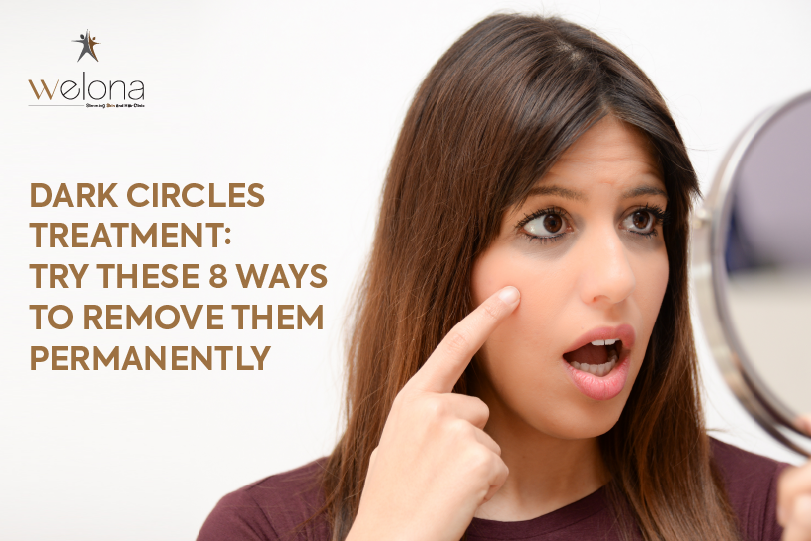 Every workaholic on Earth has come across them at some point or the other. They’re silent invaders, you don’t feel them unless you take a good look at yourself in the mirror. When you spot them, you groan, thinking: “Here we go again.” Yes, we’re talking about dark circles.

The common conception about dark circles under eyes is that it’s a result of excessive stress and pressure in life. The treatment methods we pursue are also focused on stress-busting. However, there have been recent findings that show us that there’s more to it than meets the eye. Let’s try and understand what lies behind dark circles a bit better, for starters.

As Indians, our skin tone is uniformly darker across the board, and therefore more prone to dark circles

No matter how much we try to age in reverse, it’s a process that can’t be stopped. Not yet, at least. As we get older, our skin starts to lose its elasticity, with the fibers becoming weaker. As the skin under our eyes is already thin as it is, it’s prone to becoming darker as you age.

When some people address how to remove dark circles permanently, they often find that it’s something they inherited from their family. When most people in your immediate family have persistent dark circles, chances are high that you’ll get it too. The sad part about this is that we don’t know how to stop genetically inherited dark circles. Yet. We are working on it, however.

On the other end of the spectrum, there are the factors that we CAN do something about. Yes, you guessed it right, fatigue is a major factor in the occurrence of dark circles.

It’s quite simple. The more you strain your eyes, the more it reflects on the skin and the blood vessels. They become darker and more visible. The thin layer of skin under your eyes does you no favors in hiding it, and the dark circles form as you tire yourself out further.

Have you ever had a really bad cold, with that terrible feeling of dark, droopy eyes? Not just disease, even severe allergies can trigger dark circles. The anti-allergic medication you take can contribute to it because it’s a vasodilator i.e. it expands your blood vessels, and this causes them to be more visible. This causes the darkness to manifest in areas where the skin is very thin, such as the eyes.

Dark circles under the eyes can also develop as a result of neglecting the little things that keep us healthy. For example:

These are some things in our daily lifestyle that we can change to avoid ever getting dark circles. Considering how commonplace it is, we’re looking for a more concrete solution though, aren’t we?

How To Remove Dark Circles Permanently?

The golden question on the mind of everyone who’s had dark circles, ever. Which is a fair amount of people? There’s a little disclaimer for all of you, however, that’ll brighten your day.

Dark circles are usually not a permanent issue. Except in cases where they arise due to aging or prolonged sickness, they can be sorted out with a few simple remedies.

So fret not, we’ve got some quick-fix tips for your dark circles.

Being well-rested. This is by far the simplest thing you can do to reduce as part of under-eye dark circles treatment. It also works wonders for your overall health, so there’s that!

Keep it cool. As we saw earlier, a major cause of dark circles is inflamed blood vessels. What better way to treat them than a cooldown, then? People try many things from cucumbers on their eyes to specific eye packs, to cool off their eyes. Cooling the eye area helps relax the blood vessels, which will reduce your dark circles.

For most people, it’s the unappealing appearance of dark circles that’s the major problem. Thankfully, there are plenty of makeup products available that help in hiding them. Concealer is one such product.

If the problem persists even beyond that, consider visiting your dermatologist for professional help on how to remove dark circles permanently.

They will prescribe peels and eye packs that help curb pigmentation.

Another simple yet effective treatment for dark circles is to apply proprietary skin-lightening creams in the dark region. These creams contain specific acids and quinones that help reduce the pigmentation in the affected region, this is one of the pigmentation treatment people belives.

If the region under your eyes is sunken in addition to being dark, then experts might suggest injecting fillers to restore your eyes to their natural state. These will be performed by a trained professional.

Surgical methods exist for those who want the ultimate fix to dark circles.

Laser surgeries help fix the dark skin under your eyes at a cellular level. The principle behind it is similar to exfoliation and can rejuvenate the cells under your eyes. Consult with a skin clinic near you if this is the way to go.

Fat removal. Fat present under the eyes can be removed in a surgical process known as blepharoplasty. It is performed by a trained surgeon and has the dual advantage of reducing puffiness as well as darkness.

These 8 points cover various methods ranging from simple to surgical when it comes to tackling dark circles.

Dark circles under the eyes are a commonplace issue that can range from a minor inconvenience to a serious problem for most. With some dedicated steps towards treating them, however, your eyes will see brighter days!