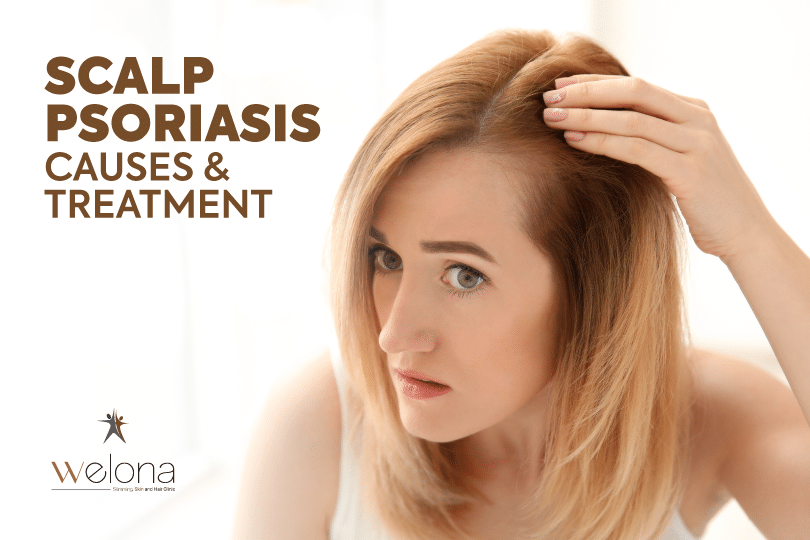 Scalp Psoriasis is a type of disorder in the skin cells that make them grow very quickly and get piled up on the scalp, making skin heightened, powdery and flaky. Psoriasis can be either on certain places of the scalp or cover the scalp entirely. It is not communicable which means it won’t spread from one person to another. Psoriasis can be mild and invisible, or, be thick, critical and chronic.

An individual suffering from mild scalp psoriasis typically displays a few scaling. An average to critical scalp psoriasis can have symptoms like the high scaly scalp, flaking, soreness in the scalp and intense itching which sometimes causes pain and burning. It could also lead to a problem of hair loss, this is not directly caused by psoriasis but could be the outcome of itching, stress and harsh treatments done in order to cure it. It may also lead to bleeding, loss of sleep and skin infection due to scratching or itching.

Scientists and doctors are still not sure about the cause behind scalp psoriasis, but the two major reasons they could think of were improper functioning of the immune system and genetic.

Scalp psoriasis treatment can effectively stop the ill effects of Scalp psoriasis, control flare-ups and act as a barrier from it to return.

If it is mild psoriasis then an individual can use medicated shampoos, creams, gels, oils, foams, ointments and soaps. After washing hair, they can also use thick creams while the hair is damp, this will intact the moisture in the scalp.

Some medications approved by the FDA are

By using these medications your scalp will be healed in around eight weeks or more but do remember it should be applied on the scalp and not on the hair. One can use shampoos having coal tar and salicylic acid, twice a week.

For average scalp psoriasis, steroids can be injected directly in the affected areas. If the affected areas don’t respond to topical treatments, Phototherapy can be done with a laser or non-laser lights. Scalp psoriasis treatment can be done through a UV comb. An individual having thin hair or shaved head may be recommended by their doctors to expose their scalp to sunlight at certain times of the day.

For critical scalp psoriasis, one can have oral pills or the medication can be directly injected in veins. Other oral pills are as follows:

These treatments using pills could have serious side effects like causing damage to the liver. It is, therefore, vital that these are prescribed by a certified doctor only.

All though it is an incurable disease, the above-mentioned therapies can help you get some relief and stop it from growing further.

We, at Welona, have a team of experts that have dealt with all stages of this disease. We understand the frustration that people go through and the outcome it has on a person’s self-confidence. We ensure that we diagnose and provide the right kind of treatment in consultation with you after understanding your condition. Call us today and get a free consultation.